Saturday was the Gemini birthday party for Ray/Ian/Richard. Richard confirmed that the LARP-you-probably-didn't-get-invited-to-and-don't-know-about is not going to happen, freeing me up for Darkon. I am both happy and sad.
Other than that, plenty of fun and chatting with various folk. Discovered that Jay&Carrie have spawned. Good on 'em. I spent no time at all talking to Megan, but I did spend a fair amount of time talking to the other Megan, who for convenience I shall henceforth call Prime.

Sunday, Rebecca turned in final grades at Tartan Hall. Apart from a few days of administrative bloo-blah this week, she's off for the summer. We went out for Mexican to celebrate and on our return, the front doorknob gave up the ghost. The door opened fine, but then the bolt decided to stubbornly freeze solid. I skillfully wielded a screwdriver to accomplish nothing; Rebecca forcefully wielded a hammer to accomplish something. In the end, I managed to do something useful by heading off to Home Depot, getting a new doorknob assembly and installing it.

This morning, I got an email from Schmap, telling me that they might use one of my pictures from Frankfurt for their guide to that fair city. Schmap seems to be kind of a neat idea. They have downloadable guides to various world cities with a google-maps-ish interface with places of interest noted on the map. On mouseover, you get a description and possibly a photo credited to some willing flickr-er. The guides are free and Schmap swears cross-its-heart-hope-to-die that there's no spyware or anything. I downloaded the one for LA, and it seems okay. Coverage is light, except in touristy spots, but this could easily grow to be more and more complete over time as a kind of futuristic guidebook/Yellow Pages (Schmap makes its money through advertising, though I don't really see anything apart from weblinks to certain locations when you click on them). The map view makes it different from many guidebooks where hotels are in one section and restaurants are in another. In Schmap, you can see everything close to your hotel. Possibly very useful for picking a hotel in a city you don't know. 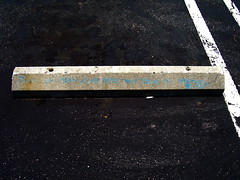 Jesus was Mean
Originally uploaded by Essentialsaltes.
This and the next flickr photo are two bits of graffiti near my work. There were many others in the same blue, but they've all been obliterated over the past couple months. The "MINE!" one cracks me up a tiny bit every time I walk past it. Just recently the trampoline showed up, so they were not related before, but now they seem connected.
Collapse