I didn't have much time to enjoy even the very tiny satisfaction of the Supreme Court putting the kibosh on the Gitmo tribunals. It's pretty tiny satisfaction since the ruling doesn't address the greater question of the indefinite detainment of presumed enemy bad-doing people at His Tragesty's pleasure.
But now we learn that the tribunals (which were illegal) were also incompetent. One of the detainees called four witnesses from Afghanistan. Months later, the US government said these people couldn't be found. Sorry, Abdullah.
The Guardian gave it a try and found them in three days. One of them was using his wily international friend-of-a-presumed-bad-doer artistry to hide out as a professor at National Defence University in Washington DC.

And here's the hearts-and-minds angle:

Lies and old rivalries had sent many innocent Afghans to Guantánamo, said Taj Muhammad Wardak, a former governor of Paktiya. "You can investigate these people here. There is no need to send them to Guantánamo," he said. "It is a great sadness between our countries that will last for many years." 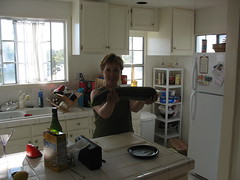 The Great Zucchini!
Originally uploaded by Essentialsaltes.
Zucchinis of Unusual Size? I don't believe they exist.