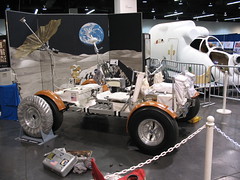 Lunar Rover
Originally uploaded by Essentialsaltes.
WorldCon photos.
I apologize for a fair number of blurry pictures of the Masquerade/Lux and everything else, but I've winnowed out all the really bad ones except for a few that I couldn't discard.

I also have a separate flickr set for Space Cadets: Guardians of the High Frontier, the LARP that Enigma+ ran at WorldCon.

WorldCon - This was my first WorldCon. I'm not much of a convention goer at the best of times. I still haven't been to a LosCon, even.

Overall impression: It was strangely exhilarating to be among likeminded fellows. You could almost feel the aura of ease and friendliness that arose off thousands of people who felt free to be kids again. I got sick of hearing that one should "dance like no one's watching" when I was at NDA, but that's what these people were doing, and all six thousand of them knew the same steps.
On the other hand, it's hard not to notice that the WorldCon population was far more older, fatter and more infirm than the national average. I saw more wheelchairs and powered scooters there than I do when I visit my grandparents' retirement community. Is this terrible? No, it just is what it is.
There were great exhibits of robots and cars (including

obishawn's) and costumes and books. I think one of my favorite moments was seeing a couple of the convention center's food service staff checking out the Batmobile.
I spent most of my time at Enigma+'s Space Cadet LARP (+, because there were important contributions from several non-Enigmans), so I didn't spend as much time at the con proper as I would have liked, nevertheless I had time enough to spin through the exhibits and get a couple books signed.
I was pleased to get Phyllis Eisenstein to sign my Arkham House edition of Born to Exile. Her first book, I believe. Apart from her grey hair, she looks essentially the same as the book jacket photo of her from 1978.
I endured some ribbing from Richard about my desire to get Anne McCaffrey to sign a book. But I did it anyway. Anne was a real trouper. Her autograph line, as you might imagine, was longer than the Nile, and she signed for more than an hour. And now I have her sparkly purple signature on one of the Harper Hall books, and I'm as giddy as schoolgirl.
There were several other authors that I really wanted to get to sign, but I'll have to wait for another opportunity. I at least did manage to pick up a signed copy of Peter S. Beagle's new collection a day before his novelette Two Hearts won the Hugo. But I'd still like to get A Fine and Private Place signed.
The Masquerade and Lux Theater were both great albeit (if I may say so) both overlong by 50%.
My idea of making a costume is a sheet with eyeholes cut out, but I can at least appreciate excellence when I see it. I've left some notes on my flickr photos, but there were many good entries that I didn't get good pictures of. One presentation started with familiar (but not at first recognizable to me) music, and then an entrance... it's a bird... dressed like a pirate? Aha! It's Captain Jack Sparrow!
"Dancing with Celebrities from the Stars" was a great idea and the execution was perfect. Zaphod dancing with Barbarella, Ming and Magenta, and a beautiful job by the Mars Attacks 'woman' doing the walk to perfection. Too bad she had to dance with some rotten thing from Spaceballs.
"Sterilized with Fear" was a magnificent recreation of the trailer for "The Lost Skeleton of Cadavra". Never has so much talent been utilized to recreate something so awful.
Oh, and I'll put in a word for Phil Foglio who had MC duties for the Masquerade. He did a great job rolling with the miscues and stalls for time. Even if (or especially because) he did sing the "Zero-G Polka".
After the masquerade presentations, Lux Theater took the stage and performed Lux After Dark, recreating their show at LosCon. It's an adaptation of Moulin Rouge with many science fictional liberties taken. I never expected to see

colleency shake her money-maker, but once the shock wore off, I enjoyed the show immensely. Since I know half the cast personally, my opinion is perhaps suspect, but they kept a couple thousand people in their seats long after their usual bed-times.
After the masquerade prizes had been awarded and the audience dispersed, I virtuously checked out the LARP to see if

aaronjv was around and needed help. As I suspected, he was still there with

hagdirt. I pitched in for a bit and at midnight or so, we went together to the con's party floor. After two days of keeping the LARP together, all three of us were eager to anesthetize our brains. Some con-parties were dry, but you could count on the libertarian geeks to provide booze. As did the Russian Worldcon bid party, where one could choose from a half dozen authentic Russian vodkas with Cyrillic labels. I'm not sure what Xerps was all about, but they served a mean punch that included both tequila and lite beer. It was really good. And then a tequila sunrise at the Podcasting party, where Boyett was DJ'ing up a storm.
We met up with a fraction of Lux on its way to the Browncoat party. Sadly, Maria had badly sprained or strained her ankles and was icing both, but she was game. Eventually, we found our way to the dance at the ballroom. We boogied to the ambient industrial for a while, but my tolerance for undifferentiated industrial is about four songs. Other people had reached their satiation much sooner. The exact chronology gets a bit fuzzy here, but at some point there was no one dancing on the floor at all. Perhaps at random, the DJ struck upon White Wedding, and I announced "I can dance to this", and I strode off with purposeful measured strides to the dancefloor. By the time I got there, there was an ant-trail of followers in my wake. We (by which I mean

therrin) even cajoled the dj into a swing song, and after that he was a pawn in our hands. Or feet, as the case may be.
The dance ballroom was next door to the LARP Village and after dancing and conversation had reached a lull, we stormed the place in giddy madness. It was a great moment. Exhaustion got the better of me and I bid my goodbyes, dropped one LARP volunteer off at David's and headed back to mom's, where my head hit the pillow at 4:20.

By 10 the next morning I was back at the con. Saturday was by far our busiest day at the LARP. I did nothing other than work Space Cadets from 10 to 6, so that's the end of my non-LARP reminisces of Worldcon. So stay tuned for my recap of Space Cadets: Guardians of the High Frontier.

First the thank yous. This ain't my job, but I'm doing it anyway. These are some of the contributions I know about. There is plenty I have no idea about.

David K: He built so much stuff, up to and including our rocket. He let us store stuff at his house. He let us use his house as storage and a rallying point. He is aces.

obishawn: He built and adapted so much other stuff. And did some voice work for us.

David M: He built so much other other stuff. And slaved on the derelict ship. And someday soon, I'll teach him base 4 mathematics if it kills me.

Stephen T: He came from across the country to help us out. For no reward apart from helping fellow Larpers, he manned our registration desk for two days. Aces in my book.

casketgirl: another mostly unwitting volunteer offering selfless help to us all. From the physical labor of sewing sashes to the complicated work of GM'ing missions. She also makes a good pirate.

popepat: Whatever Shawn and the Davids didn't make, Pat loaned to us. He was also active in so much of the early planning.

Tom as our sergeant; always in character, always ready for more.

notjenschiz as a fellow GM. Richard's input in the planning was not always exactly welcome, but it needed to be said. And despite his misgivings, he did everything we needed him to do during the run, and more. And I want to strangle the little shit that threw that ball at him.

I've already thanked too many people, and yet there's still Nick and Morgan and Karen and Ray and Riz and Graydon and Rachel and I could go on for a long time.

AND THE PLAYERS. We had not as many as we would have liked, but the whole thing would've been pointless without them. It was great to see people new to LARPing get a taste of it in our game and enjoy their time at the academy. It was cool to see the LARPers come by and give us a try.

As for the game itself, I'm too weary to give a blow-by-blow. Mistakes were made. Nevertheless, fun was had. I'm sure there will be long discussions about every aspect of this, but I have no desire to start it all here. I worked a lot and had some fun with my friends and some (mostly) strangers who were willing to come play in our sandbox for a while.
Collapse