I find it hard to believe this is true. But hey, if I were more credulous, I might be dead.

I'm not so sure about "bringing a bit of levity and a sense of humor to the famous dark existential painting". But thumbs up on the reward.

And in UCLA news, our homegrown animal rights terrorists have pushed a researcher to call it quits after UCLA Primate Freedom left a bomb on the researcher's neighbor's house. Since these nuts are about as organized as the Army of the 12 Monkeys, the bomb was left at the wrong place and didn't explode.

[Hey, the Bruin article was written by Dr. Peccei, who not only half-invented the axion, but was chairman of the Physics Department, once upon a time. Now he's vice chancellor for research. Way to go, Roberto.] 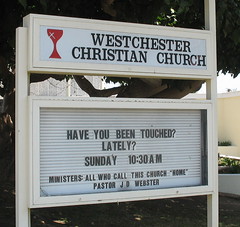 IMG_0599.JPG
Originally uploaded by Essentialsaltes.
Here's the sign in all its glory.
Collapse