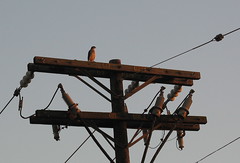 IMG_0600.JPG
Originally uploaded by Essentialsaltes.
This week on Mutual of Inglewood's Wild Kingdom: dead opossum in the bushes and hawk on the high voltage pole.

I don't think the two are related. I expect the opossum just took one last look at its ugly self in the mirror and downed all that Valium. Either that, or all those ants ganged up on him.

The hawk announced itself, "KEEEEEEeeeee! KEEEEEEeeeee!" later that day and I took a few pics.
Collapse