Yesterday, I hit the Inglewood Garage Sale. It took me quite a while to find it since it was described as being at Hollywood Park, which covers quite some area. I saw a buncha cars parked over yonder, so I figured that must be it. Nope, those were just the cars of the sad people who were at the casino at 9AM (and maybe a few racing touts). So I got back in the car and roamed around the acres of concrete surrounding the venue. I finally found it huddled in the shadow of the Forum. Speaking of the Forum, it obviously helped make Inglewood the "City of Champions" -- now that the Lakers, Kings and even the Sparks have moved to Staples Center, I guess we're now the city of losers. Anyway, I didn't buy anything at the garage sale, but there were a few interesting things to look at. Giant 1950's console radios and anthology cassettes of rap music with titles like "All about Money".

Afterwards, I went on an Apple odyssey. A couple Apple stores failed me with out-of-stock-itude. I made store 2 call store 3, so there was a fortunate end to the series of disappointments. So, once home, by clicking a few buttons marked "Continue", I set up a wireless network in the house. Okay, maybe it wasn't quite that easy, but it was pretty close. AirTunes is up and running, so it seems like my music can abandon its physical form and live on only in the spirit realm. The 200CD carousel has about 198 CD's in it, with a theoretical maximum of about ten and a half days of music. Now the stereo runs on iTunes and has more than 14 days of music available. So I guess I'll be parting with the carousel and, ultimately, the CD's.

Later still was a festive dinner in honor of

hagdirt's birthday. Although I sat among many of the same folks as at the tea (a coincidence that only struck me later), somehow conversation scintillated and sparkled much more. Not sure why that was the case, but consequently I enjoyed the evening even more than the other enjoyable evening. After a brief night-cap chez hagdirt, we pumpkinized back home. Tomorrow, Becca has to go off on a school field-trip to the Sierras. Great choice... Sierras in late October. With luck, several students will freeze to death. But that's no consolation to me, who will be pookie-less for a few days. 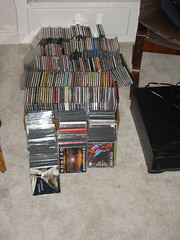 Farewell to the Flesh
Originally uploaded by Essentialsaltes.
Here are the CD's I've decided to part with. It runs the gamut from Purcell to Pearl Jam, Elgar to Elton, Scott Joplin to Janis Joplin.

More than one person has inquired about the CD's. I hope I didn't make it sound like I was just giving them away. Let's say... $3 apiece and your word of honor that you're not just going to hock them again. $2 a piece if you want ten or more. Judy has dibs on Carmina Burana, but otherwise here's the listing. Entries with a number (2 or 3) indicate multiCD sets and it's $3 per disc, ya?

Critical comments about my musical taste merit a $10 surcharge.

This entry is the official location for calling dibbs. Distant readers of this blog can also play, with shipping at cost. (Those marked with * taken by coworkers.)