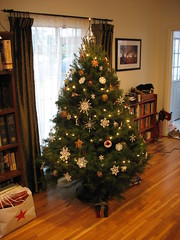 the tree
Originally uploaded by Essentialsaltes.
We're pretty much set for the Xmaholisolstizaa season. The tree is up and decorated. Becca has put up lights, inside and out. The Christmas CDs have been ripped. The room smells of tree, presents, candles and spiced nuts. Yay!

A couple days ago I finished Cordwainer Smith's Norstrilia, apparently his only sf novel. It's very dated and (as usual with 'Cordwainer Smith') the book is less interesting than the author's life. Seriously.
But I will point out the random fact that the book uses the phrase "Instant Messages". Of course, it refers to speed-of-light-defying messages from planet to planet, but so what.
The book also features 'underpeople,' who are genetically modified animals, basically treated as slaves. Despite the fact that the world's sexiest person is just such a catwoman, canoodling between people and underpeople is strictly verboten on pain of death or memorywipe. If this book had been written a decade later, I'm sure it would be a classic of furry stroking-material. But as it is, it's a furry dystopia, where not even underpeople of different stocks get it on.
Collapse