It occurred to me that an extra level of difficulty could be squeezed out of the Guitar Hero controller. Just as you can strum a guitar without holding any frets down, GH could require you to strum without holding any fret buttons. The hardware/software picks up this information and it has a clear relevance to musical playing. The difficulty is coming up with an obvious way of showing such a note on the display - my solution would be to have an extended bar that extends across the entire virtual fretboard, like a five-button chord smeared out into a long bar reminiscent of the strum bar itself.

In tangentially related news, Brad Delp of Boston died. That's Boston as in "More Than a Feeling" Boston.

I am filled with trepidation about RB's plan for a Guitar Hero showdown between myself and MW. My main fear is that there will be a skill mismatch, and that would lead to no fun. I know that there are eight-year-olds and slices of pizza that are better Guitar Heroes than I am. So as one more thing the world doesn't really need, I suggest there should be some sort of GH ranking/handicapping scale, based on the completion of particular objectives. Other Guitar Heroes and Zeroes should feel free to propose additional levels, dispute my ordering, or just vent. The scale could help foster more equal competition (for people who like that sort of thing; me, I'm content with co-op).

(except for the specific mention of Jordan, 'songs' means just the regular setlist. Rocked means successfully played to the end.)

Most recent godlike accomplishment: 5-starring Beast and the Harlot on Expert. Yet, I still cannot 5-star Woman. 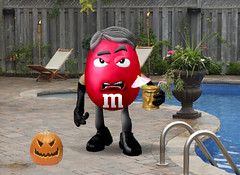 One Zombie Too Many
Originally uploaded by Essentialsaltes.
Become an M&M

Went out to visit the tax-lady behind the Orange Curtain. In a two-birds-one-stone move, we went on to mooch a dinner off of mom and stepdad. We chatted and reminisced and so on. We got on the subject of smoking; Mom's down to less than a half-pack a day. Worse than zero, better than in days of yore.

Anyway, Mom then says to me, "Do you remember back when you were about ten... I noticed that there was a lot of Coke in the fridge... that you weren't drinking it... and I asked you if you still liked it... and you said:

'I'm just proving to myself that I can give it up.'"


I neither remember this, nor frankly, can I believe it. I gave up Coke? Cold turkey? When I was ten? Madness.

The creepier thing is realizing that I almost certainly did this to show that if I could do it, she could too.
Collapse