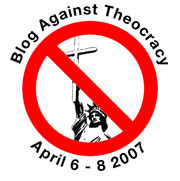 I'm not an alarmist when it comes to the threat of a Christian theocracy in America. Sure, there are nuts out there who would have us living in the Republic of Gilead, if given half a chance. But they're nuts, and I'm sure that most of the good Bible-believing evolution-disbelieving folk of this nation would be on the side of us miscellaneous folk in preventing that kind of a theocracy from coming to pass.

But I do think there is a danger of "creeping theocracy." Of course, this (to some extent) is to be expected. The First Amendment declares that "Congress shall make no law respecting an establishment of religion, or prohibiting the free exercise thereof." What exactly does that mean? Fortunately, that's not my job, it's the Supreme's, and they've cobbled together the Lemon Test to decide what the government can and can't do. But the boundaries are indeed fuzzy, so it's natural that there will be some give and take as that boundary gets more clearly demarcated. However, it's also clear that the Congress and the Administration are working to press the boundary in only one direction: toward increased mingling of church and state. And so far there seems to have been little resistance to this shoving of the boundary.

So the question at hand is... has the boundary been shoved too far? I just want to peek at a couple instances that suggest to me that it has.

A while back, I wrote about some changes to the rules for military chaplains. Previously, chaplains were enjoined to offer "nonsectarian prayers, or a moment of silence, at public meetings or ceremonies, especially when attendance is mandatory for service members of all faiths." Now, they were told they could "pray according to the dictates of the chaplain's own conscience, except as must be limited by military necessity, with any such limitation being imposed in the least restrictive manner feasible." I wondered then on how that would be received in the (very rare) cases where the chaplain was of a minority faith. For nine years, a particular Wiccan group has been trying unsuccessfully to get a Wiccan chaplain (oh yeah, Wiccans have spent the same amount of time trying unsuccessfully to get a Wiccan gravemarker approved by the VA - let's hear it for Governor Guinn of Nevada for intervening in one case) approved. They had met all the hurdles but one: nominating a viable candidate. Then, a miracle occured (well, practically): Chaplain Don Larsen, serving in Iraq, applied to have his affiliation changed from Pentecostal Christian to Wiccan. The outcome was unfortunate, not only did the Army not switch his affiliation, it de-chaplained him (when his sponsoring organization (tipped off by the military) pulled the plug on him) and sent him home.

Was Chaplain Larsen really allowed to "pray according to the dictates of the chaplain's own conscience?" Now, everyone likes to pick on Wiccans. I mean, they're just plain kooky. But they have the rights of free exercise and equal protection under the law. It seems like one religion is much less equal than others. As then-Gov. Bush said, "I don't think witchcraft is a religion, and I wish the military would take another look at [Wiccan meetings on military bases] and decide against it."

Okay, so now let me pick on faith-based initiatives. I'll try to make this brief, because my stomach says it's lunchtime. It's nice that faith-based organizations want to help. It's not so nice that they want to line up at the government teat, without obeying the same rules that everyone else has to obey. They don't have to obey equal opportunity employment laws, which maybe isn't so objectionable, except for the part about me paying for it. But it does bother me that there doesn't seem to be appropriate oversight over the services being provided. I really don't think that being forced to read the Bible for seven hours a day and renounce one's Catholicism constitutes a drug rehabilitation program. Let me take another quote from that article: "At one point, the program director told his aunt that he 'gave up his right of freedom of religion when he was placed into this program.'" This jerk is getting public funds to deny someone's First Amendment rights. That, my friends, is a sign of creeping theocracy.
Collapse