Internet at work was down for a few days and internet at home went down last night, so I've been cranky. Not the right week to start playing an online game. But I'm doing okay in ogame - I just made some bastard pay dearly for stealing 1000 deuterium and a handful of metal and crystal. He lost 3 fighters and a cargo ship in the process, and I only lost one rocket launcher permanently.

But enough of that. Work is going along smoothly, and I should get one project at least temporarily out of my hair pretty soon.

Today, Becca and I headed out to the Los Angeles Arboretum, which (naturally enough) is in Arcadia. They were having a garden show, and Santa Anita (across the street) was already open for the Kentucky Derby, so traffic and parking was a little dicey. But we got in and enjoyed a long walk through the arboretum and a fast walk through the garden show. Plenty of wildlife in the Arboretum, including guinea fowl and peafowl, but the strangest thing was by the lakeside. We stood at the edge and stared at this little rocky lump. What is that? It's moving. It's coming right at us. It was quite close before it resolved into a tiny turtle head. I think they must be used to being fed by people, because if you stopped at the edge of the lake, little rocky turtle heads would all home in on you.

After our return, Becca made us some chorizo omelettes in honor of the Mexican victory over the French. 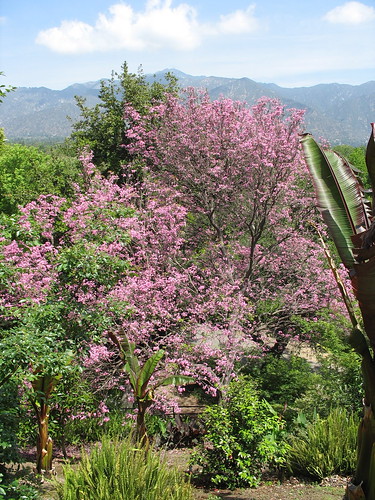