Had a fun-filled and active Caturday.

Truly a Caturday, since we recently got Winston a girlfriend/sister, Violet. We picked her up from the SPCA last weekend, but I haven't posted anything, since we've been watching how they get along together. They seem to have reached an accord, but it took some time. Anyway, the SPCA gave us a coupon thing for a free vet exam, and fearful that (if we ignored it) they would yank the cat, and we'd be forced to weep on our TV talk show about the injustice of it all, we took our perfectly healthy new cat to the vet. Of course, that involves stuffing the cat in a box and transporting it. Winston was a pretty good traveller, but Violet is a bit more violent. The cardboard cat carrier has some amazing gouges and tears in it. Given about an hour and free reign, I think she could easily Houdini out of it.

After the trauma, Becca and I made some chili. Well, Becca did anyway, but I helped buy ingredients. It turned out quite tasty, with plenty of chipotliness. We made a huge amount, but I have a huge appetite for chili, so it may not last past this weekend.

Then in the evening, while Becca slaved at paper-grading, I went off to bridared's birthday party, with bonus birthday boy,

randbot, who was in town due to uxorial generosity. Beer, whiskey and old good friends were just what I needed. I had a great time and chatted in groups large and small (except the Heroes circle, which literally shunned my infidel self). Brian had acquired Guitar Hero III for the PS3, so ultimately my twitchy fingers had to give it a try. The system was calibrated and recalibrated a dozen times, but I never found the synchronization to my liking. But my brain would compensate after a bit. So I played several face-off games where I was losing for the first 30 seconds and then the brain would slowly lock on, and I arm wrestled the meter onto my side. I didn't notice problems with the guitar, such as described by

servingdonuts, but some of that may be that the synch was so far off (and the interface so different) that I didn't have a very good sense of when I was missing notes, much less whether the problem was me or the guitar. More experimentation is clearly required.

Karaoke Revolution was also busted out, and I was happy to retire into the shadows and provide inept back-up vocals from time to time.

ian_tiberius has found a lucrative sideline in being paid to sing. His reserve was only partially broken down by whiskey, but the $15 everybody chipped in helped bring down the rest. His performance of "Oops, I Did It Again" reminded one at times of a sick manatee. The performance may never be repeated so I count myself lucky a member of a very select group. Probably, now that he's gone pro, it'll take at least $50.

On the way back, there was a Darwin Award on the 10. I managed to slide off onto the Alameda exit and continue west on Washington. I tried to get back on the 10 at Grand, but the onramp was blocked off. Curses! Finally made it back on at Vermont and made my uneventful way home. 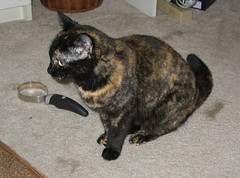 Violet
Originally uploaded by Essentialsaltes
She has the softest fur ever. I also took a photo of Winston, so he wouldn't be jealous.

Interesting NYT article about Antony Flew and 'his' new book, There is a God:

As he himself conceded, he had not written his book.

“This is really Roy [Varghese]’s doing,” he said, before I had even figured out a polite way to ask. “He showed it to me, and I said O.K. I’m too old for this kind of work!”

When I asked Varghese, he freely admitted that the book was his idea and that he had done all the original writing for it.

Hard to say how much bias there is in the reporting, but it certainly reads like a ga-ga octogenarian has been tugged at by both the theists and the atheists, with the theists having the stronger pull.
Collapse