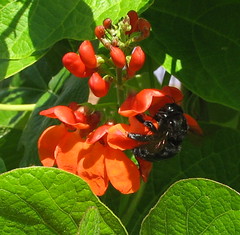 IMG_2059.JPG
Originally uploaded by Essentialsaltes
Charmian graced the garden with her presence this morning, so I took a few pictures of her, as well as other things around the garden.

Last night was the Three Geminis Birthday celebration. Demonstrating a leap into the future, all three have LJ's now, while zero had LJ's last year. Plenty of conviviality. And scotch. And (courtesy of the soon (sniff) to be departing

(personal) Highlight: after discussing the slashdotting of Robert's workserver following the release of some of his total Photoshop jobs, Robert said it was like a DDOS attack, but since the strain on the server came from people who were positively inclined in the data and the mission, I thought a better phrase was a denial of service hug, which tickled Robert to no end.

(personal) Lowlight: after shepherding a CD-ROM of Phil&LB pictures from C&L's wedding safely through about 3 hours of party, largely by means of sticking the damn thing on the end of a finger, I managed to break it under my fat ass in the last half hour of partay. Sorry guys! Don't feel obliged to make me another - I'll just ruin it.

But mainly it was fun to hang out in a crowd of excellent people, ranging from bestest friends to those-cool-people-I-see-once-a-year-at-Gemini-time.
Collapse