Voted! I lucked out. Becca voted absentee and I was carrying along her ballot. Apparently, the elections officials don't want people standing around with live ballots in their hands, so I got pulled to the front (Yay!) of the impressively long line (Yay!) at the polling place and got my inkavoting on. The line was huge. Waaaay bigger than 2004.

aaronjv brought me back a souvenir from this year's HPL Film Fest. He scored the Darkest of the Hillside Thickets' set-list!

talentlessclod were kind enough to sign it with endearments like, "Where the fuck are you?" and "Why aren't you here?"
Thank you, all of you! That's really cool!

This month's Westways (AAA magazine) mentioned the Fillmore and Western Railway, a 1920's-1930's vintage train that runs between Fillmore and Santa Paula (more or less along route 126 in the vast blank space that exists in my mental map between Santa Clarita and Ventura, Moorpark and Ojai).

They do 'murder mystery' events on the train as well, and I notice that they're having a special event on Saturday, Nov. 15th. The Wizard (for copyright reasons) Express

Probably a lot of munchkins aboard, since this is a 'family' mystery event, but this event, or others, or just the train itself might be of interest to some of you. I remember thinking the Wine Train in Napa was going to be lame, but I enjoyed it a lot (it helps when there's a wine-tasting car). This looks like a similar experience.

popepat? Have you done it? 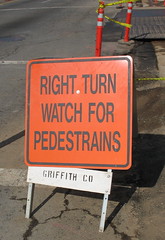 Watch for Pedestrains
Originally uploaded by Essentialsaltes
A pedestrain is either a cool steampunk people mover or a conga line.

The lady across the street (whose name I have once again forgotten) came over and gave me a bottle of champagne! Celebrate!

At the moment (with 22.4% reporting), Californians prefer chickens over veterans over victims over gay people.

Unfortunately, gay people are currently so far down on the list that Californians unprefer them.

ETA: at 35% reporting, support for prop 8 has slimmed down a couple points to 52.7%, but it seems to be fluttering there stably. Chickens still have a narrow lead over veterans.
Collapse