Atheists are a little slower than theists.

A high-level meeting of the United Nations General Assembly has rejected the use of religion to justify the killing of innocent people and terrorist acts.

Well, that fixes that.

Readers of Stars and Stripes respond to a story about the "Secular Coalition for America’s plea ... for more acceptance of atheists and agnostics in the military." Most of the comments are about what you might expect, but I'd like to salute Navy commander John King (ret.):

As a devout Christian with a church that requires an educated ministry (Presbyterian), I also resented being harangued by Pentecostal goobers during my 20 plus years of military service. 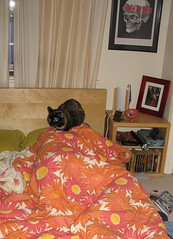 Perched on my shoulder
Originally uploaded by Essentialsaltes
This is how my Friday started.
Collapse