"Though they denied most of the traditional teachings of Christianity, they called themselves Christians, and most were content to remain in the Danish National Church or the Church of Sweden, the traditional national branches of Lutheranism.
...
The interviewees affirmed a Christianity that seems to have everything to do with “holidays, songs, stories and food” but little to do with God or Creed...


Thoughtful, well-educated Danes and Swedes reacted to Mr. Zuckerman’s basic questions about God, Jesus, death and so on as completely novel. “I really have never thought about that,” one of his interviewees answered, adding, “It’s been fun to get these kinds of questions that I never, never think about.”

This indifference or obliviousness to religious matters was sometimes subtly enforced. “In Denmark,” a pastor told Mr. Zuckerman, “the word ‘God’ is one of the most embarrassing words you can say. You would rather go naked through the city than talk about God.”

One man recounted the shock he felt when a colleague, after a few drinks, confessed to believing in God. “I hope you don’t feel I’m a bad person,” the colleague pleaded."

It's a shame I just made a big order from amazon, 'cause now I wanna add Zuckerman's book 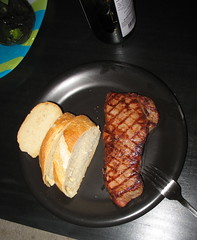 Linner
Originally uploaded by Essentialsaltes
Check those grill marks. I am a god.
Collapse