The title "Andy Capp" is a pun. A more irrelevant realization I can hardly imagine.

Wurstküche now has Underberg on the menu, not that I offer a recommendation, except as a 'do everything once'.

The manga I picked up as part of the Little Tokyo scavenger hunt was Girls Bravo #2. Once you strip away the fantasy elements and fantasy physiques, the basic plot elements are indistinguishable from Archie comics.

Veronica is way hotter than Betty, but too snobby and high-maintenance for my tastes. 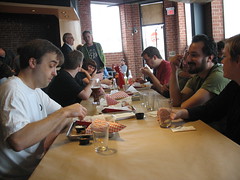 Wurstküche
Originally uploaded by Essentialsaltes
It was a success. The place was busy, but not packed. Given that dark_of_night and I were the only Yeses on the poll by the time the day rolled around, I was pleased by the turnout. A&K&P&J&LB&B&I&J&T&us

After we parked, we met a Japanese cat-spirit. If his spirit-ness doesn't come through well there, check out the close-up. His fat little body sat there, perfectly upright, with his paws delicately placed on the planter, watching the world go by. Dispensing with chronology, we also saw some not-so-little birdies in their nest on our way out.

I had the green chile, cilantro, chicken/turkey sausage, which was very good, but mild, so that it didn't live up to the onion and hot peppers I topped it with. Dark_of_night had the duck/bacon/jalepeno sausage [which was actually my first choice, but we gotta have different sausages in order to effectively share] and it was magnificent. Magnificent. Mustard was there, but it seemed superfluous.
The Belgian-style double-dipped fries were good, but not as good as I remember Benita's Frites being. Alas! Alackaday! That Benite's Frites are no more. The chipotle ketchup was pretty awesome.
To drink, I had the Aventinus doppelbock, and it did not disappoint. Spicy, fruity and (as all the reviews indicate) surprisingly light tasting for a doppelbock.

Essentialsaltes' Law is starting to strike with a vengeance. There are now 18 bids on Tomb Raider. We'll neglect the fact that most of those were probably automatically generated, but it's now going for more than any of the other three PS3 games.
Collapse