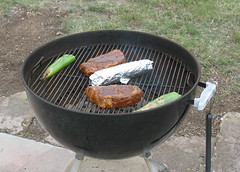 zorker's, where the former showed off crepe skills and the latter produced chocolate soup, which we just had time to sample before moving on to

edgyspice & Tim's new place, where I almost had a martini and had an almost Cosmo [no worries... Triple Sec adds mostly sweet, and I'm a bitter/sour kinda guy]. We made it to 2010 before pumpkinizing.

New Year's Day, I played video games, watched football, read books, and in my only productive moment, grilled the feast you see in the image. A great start to 2010.
Collapse