Coming back from TJ's there were the most gorgeous views of the mountains, absolutely covered with snow, with puffy clouds crouched around the foothills. Amazing.
Went out later hoping to catch some pictures from the vicinity of Kenny Hahn park, but the clouds had rolled up and mostly obscured the mountains. Boo. But our adventure up La Brea took us to Bevmo for the acquisition of spirits rare and mundane. There's an elderflower liqueur that's not St. Germain. Thatcher's is much less sweet and more herbal. I know some among you will bear no ill words against St. Germain, so I will say only that Thatcher's is different. And it's organic, if you're some kind of a hippy.
Heading back south on La Brea, we hit up Umami Burger. I know, how 2009 of me, but we are not trendoids. My Hatch Burger was awesome - exactly the right feel of flame and fat and beef, coated in quintuple smooth jack cheese that melted the way cheese melts in advertisements, but never in real life (until now); the chile relish added some extra interest. Becca opted for the triple pork burger (ground pork, chorizo and bacon) - I had a taste and it was like a gourmet sausage patty. I prefered the cow, and she preferred the piggy, so we were each well satisfied. Sadly, neither of us cared much for the sides. The tempura onion rings sounds like a great idea, but in execution they were sog-greasy. The triple fried parallelopiped fries were geometrically perfect, but undistinguished. The umami ketchup didn't do it for me, either. Sure, kê-chiap may have had its origins as fish sauce, but for me, the less anchovies in my ketchup the better pleased I'll be.
No beer at the La Brea location, but the Mexican Coke was just right. 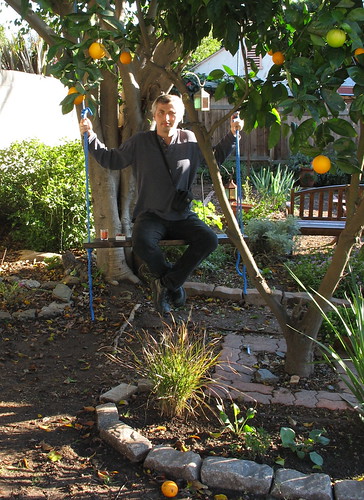