The dull life of a hedge fund manager, who studied classics at Oxford.

These articles contain the following statistically improbable phrases:
designer hotpants that “barely covered her buttocks”.
a lap dance at the Crazy Horse Cabaret in Paris with Charity Wanju, an Oriental escort. [I guess the preferred nomenclature, dude, has not crossed the pond.]
“partied like a rock star”
He claimed women are attracted to him — “a wealthy and powerful man” — because “that’s the way of the world”.
Lucky Catullus
pedicabo ego vos et irrumabo
the "queer" and the "faggot"
"I will ram my cock up your ass and down your throat."
This article is subject to a legal complaint

Just got back from the Monsters from the Id screening.

I enjoyed it, but it's certainly a flawed piece. I think the biggest problem is that the documentary doesn't, at first, know what the hell it's about. To quote the director: "When I first started making this film, it began as a love affair with 1950's Sci-Fi cinema. Watching these films as a child there was something so cool about them and amazingly it remained that way as an adult. At first the documentary was conceived as a montage style genre study. However, after watching over 30 films in their entirety a new theme started to emerge ... "

Strangely, watching the film is like watching the director come to this sudden realization. Seriously, it's like it was shot and edited chronologically, and suddenly he gets a new idea and chases it down for the rest of the film, leaving the first, aimless, part of the film intact.

The thesis that ultimately emerges is that science fiction films of the 50's are a product of their time and culture, as was the science of the50's, and that all of these had effects on making little girls and boys go into science. And fewer boys and girls are going into science these days, and gosh darn that's just plain bad.

OK, so what does the film provide? If you want a clip-show of the awesome bits of 50's sf movies, with a pretty rocking soundtrack, then this is your movie (if you skip the talking head parts). There are lots of nice montages that will peg your nostalgia-meter. I would add the caveat that some of the montages in the early part of the film use clips that are too short to adequately savor. But longer clips feature more prominently in the latter half.

The talking head parts are a mixed bag. The clear star is Homer Hickam, author of Rocket Boys -- from which October Sky was made -- detailing how he went from a West Virginia kid staring at Sputnik overhead to a NASA engineer. Richard Scheib is a Kiwi movie critic who runs a website devoted to sf and fantasy work, but I don't think he said anything remotely novel. Then again, he was covering ground that I'm pretty familiar with. But I think the nadir was reached with Professor Dubeck from Temple. He's probably a great guy, and students may like his use of sf films in his physics classes for non-majors, but there's maybe a five minute sequence in the documentary with him explaining the power dials in Forbidden Planet that is as boring as it is pointless. There must have been some snappier way to show how to use these films to teach science. (Or maybe there isn't and the whole idea is ridiculous.)

The filmmakers were not present (so far as I know) but there was Q&A with a JPL dude who is into exocritters, a biologist dudette who can make a mouse from a mouse skin cell, and the ex-biologist Randy Olson, director of the hilarious Flock of Dodos. An interesting chat, but the thing that sticks out most in my mind is that, due to the geometry of the theater, the dude with the camcorder in the front row probably has some excellent upskirt video of the biologist. 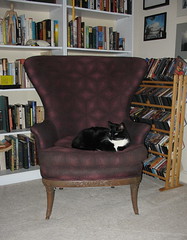 The new chair
Originally uploaded by Essentialsaltes
Winston models the new chair for you all. There is some relevance to a recent pharyngula post, vis-a-vis libertarian pets. To quote a commenter there, "Cats are the epitome of the libertarian 'I've got mine, fuck you.' ethos."

Direct flames to PZ, especially since his appearance in CA conflicts with someone's birthday bacchanal.
Collapse