Lack-of-god help me, but every time I hear "African Cats, narrated by Samuel L. Jackson" I picture something much funkier than a nature documentary.

The latest missive from VALIC:

"Please be advised your spouse and the notary must sign and date the form on the same day. Please complete the new form enclosed in its entirety and return it to our office for processing."

Yeah, that is sort of the point of the notary... to actually be there to witness it. And I must confess that the notary did indeed put the date as March 12, 2010. It was all part of my fiendish plan. I suborned the notary to sign the document a year ago, just waiting for March 12, 2011 to roll around to forge my wife's signature, cheating her out of her half of the $800.
Okay, okay, this one's the notary's bad. But let's see if VALIC will accept the corrected notary document, or if we'll have a repeat of the saga of the expiring signature. Stay tuned, and keep those limbs crossed.

For the uninitiated, Thea von Harbou was Fritz Lang's wife, and she wrote the screenplays for most of his early works (until she joined the Nazi Party, and Lang fled Germany). In addition to screenplays, she also more or less simultaneously wrote novelizations of the story. Case in point, Metropolis.

Wow, it's really quite a mess. Extremely overwrought, romantic verbiage mashed with dystopian pulp philosophy. I've seen some people say the novel helps you understand the movie. I found that my memory of the movie helped me understand the freaking novel. Perhaps the most extravagant verbal excess was at a point where our heroine is imperilled by slowly rising waters. The water suddenly has a two page soliloquy, and starts puttin' the moves on Maria:

Yes, now the water seemed horribly cool, as her slender feet dipped down into it, and it murmured as she ran along through it. It soaked itself into the hem of her dress, clinging tight and making progress more and more difficult. But that was not the worst. The worst was that the water also began to have a voice.

The water quoth: "Do you know, beautiful Maria, that I am fleeter than the fleetest foot? I am stroking your sweet ankles. I shall soon clutch at your knees. No one has ever embraced your tender hips. But I shall do so, and before your steps number a thousand more. And I do not know, beautiful Maria, if you will reach your destination before you can refuse me your breast. . . .
...
"Beautiful Maria, how Sweet are your hips. ... Is the man whom you love never to find that out? Beautiful Maria, listen to what I say to you: only a little to one side of this way, a flight of stairs leads steeply upward, leading to freedom. . .. Your knees are trembling . . . how sweet that is! Do you think to overcome your weakness by clasping your hands? You call upon God, but believe me: God does not hear you! Since I came upon the earth as the great flood, to destroy all in existence but Noah's ark, God has been deaf to the scream of His creatures. Or did you think I had forgotten how the mothers screamed then? Have you more responsibility on your conscience than God on His? Turn back, beautiful Maria, turn back!

"Now you are making me angry, Maria. Now I shall kill you! Why are you letting those hot, salty drops fall down into me? I am clasping you around your breast, but it no longer stirs me. I want your throat and your gasping mouth ! I want your hair and your weeping eyes !

Um, yeah. I didn't care for it much. One of those occasions when the movie is better than the book.

Enslaved: Odyssey to the West is a retelling of the 16th century classic Chinese novel, Journey to the West, in which the story of a Buddhist Monk seeking sutras is replaced by a postapocalyptic evil robot smashfest. Okay, okay, I can see where they lifted a few details here and there. And anyway, it's literary cred is of secondary importance to how good the game is.

It's fun enough, but somewhat limiting. You are definitely firmly attached to a rail that leads you inevitably from one set-piece to the next, and they get larger and more explod-y. And the rail is often quite obtrusive. On the plus side, the world is visually interesting - coming off Fallout 3, where the postapocalypse is unrelentingly grey, Enslaved is at least a very colorful world. On the minus side, I think the developers worried you couldn't see the ledges and pipes that you need to run around on, so they made them glow a bit. It breaks the realism, and it shows you your path laid out like fate in front of you.

Andy Serkis voices the main character, and was also involved in the motion capture and voice acting process. I think it shows. The acting is top-notch. The story has gotten a lot of attention, but I don't think it's really any more than adequate, though the epilogue has a hint of something better, though it's chucked in at the last minute without much relevance to the rest of the game.

The actual game play was fun enough, but I think they could have done more with the interplay between your character and your captor/companion. In some of the early chapters, there's a certain amount of teamwork and strategy (even if your companion's contribution is to do exactly what you tell her to do). I thought it was building up to something where you'd have to be simultaneously smashing robots and giving her orders, or smashing robots here, while making sure to protect her over there. I was anticipating having to send my brain into full-on Ender Wiggin mode. Instead, the interplay between the two characters actually decreases, and mainly you just fight bigger and badder mechs, solo. Boo.

Also, it seems like it was over pretty fast. The main story of Fallout 3 took longer to complete, and there was still lots more fun to be had roaming the landscape.

But I did spot

colleency in the credits, which made me go 'Yay!' 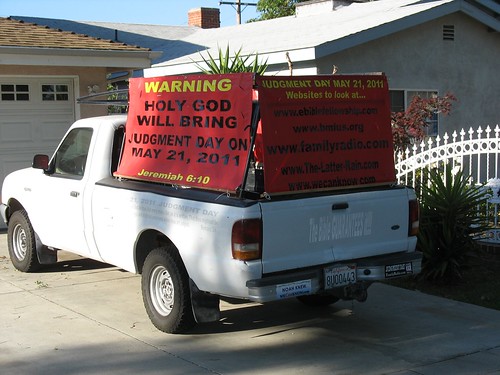 This home is a few blocks away from us... and even closer to A&B.