M is for Magic is a young adultish set of short stories self-consciously titled in the vein of Bradbury's R is for Rocket. As always, Gaiman is a story-teller's storyteller, taking fun liberties with fairy tales and other well-worn tropes, like the English gentlemen's club story. I'm a sucker for a tale from the White Hart, or to hear what a few small whiskeys will inspire Jorkens to impart, so I'd say my favorites in this collection are the story from the Lost Carnadine Rogues' Club - "How to Sell the Ponti Bridge" and the story of the Epicurean Club - "Sunbird", which is not so much a club story as it is a story in the vein of RA Lafferty's tales of Aloysius Shiplap & Co. 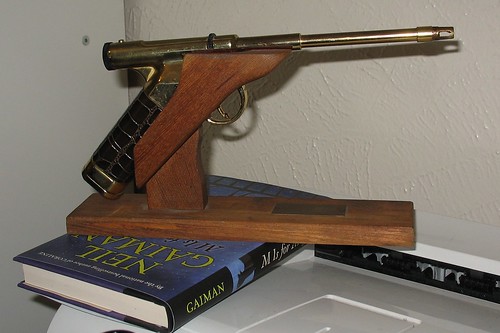 Picked up this Match-o-Matic lighter at the Torrance Antique Fair. It has a nice Scaramanga look to it, so I'm set for the next (if ever) swingin' 60's Spy LARP.

Since this book did not exist, it was necessary to create it.

De Tribus Impostoribus (aka The Three Impostors (but not The Three Impostors, which is one of Machen's best works (and as long as I'm nesting parentheticals, I'll note that a pet peeve of mine is the misspelling 'imposter' which shows up all too frequently even in newspapers (I mean, no one would write 'mayer' or 'tracter' and say 'oh, that's just how we do it in English now'))))

Anyway. The three impostors of the title are Moses, Jesus, and Muhammad. The work was long considered a near-fabulous work like the Necronomicon... a forbidden book that rejected revealed religion and exposed the impostors as impostors. Seriously, Pope Gregory IX ascribed the work to Holy Roman Emperor Frederick II, in twelve-freaking-thirty-nine. The book may have existed then, it may have come into existence in 1598, or 1716, or 1753, or 1904, or last Wednesday. The book I read is of last Wednesday vintage, but is a photocopy of the 1904 edition published in the US under the name Alcofribas Nasier (aka the pseudonymous anagram that Rabelais used to publish Pantagruel (but actually apparently one Samuel Briggs of Cleveland, OH). The text starts with an introduction that quickly namechecks the Ancient Accepted Scottish Rite, making the whole thing sound like some sort of Masonic prank. However, since I first ran across a reference in a work about the founding fathers... oh snap, they were all masons, too.

Anyway. Although there is an interesting 'presentation' written by Frederick II to Otho, and a couple other details of the sort, very little of it reads as though it were written in the 1200's, even if it filtered through several translators and languages in the meantime. It smacks much more of Enlightenment deism, but really is such a strange sui generis sort of thing. Some of the arguments against revealed religion are old and tired, while others are strange and new. Hardly a Necronomicon that will corrupt your mind (well, maybe it is, but my mind is already corrupted) but still a really peculiar thing.

Yes, I pushed a bit to get this read by Easter. So sue me.
Collapse