But still in the news:

Hundreds of families who had babies taken from Spanish hospitals are now battling for an official government investigation into the scandal.

Several mothers say they were told their first-born children had died during or soon after they gave birth.

But the women, often young and unmarried, were told they could not see the body of the infant or attend their burial.

In reality, the babies were sold [for the approximate price of a condo] to childless couples whose devout beliefs and financial security meant that they were seen as more appropriate parents.

The children were trafficked by a secret network of doctors, nurses, priests and nuns in a widespread practice that began during General Franco’s dictatorship and continued until the early Nineties.

I NPC'ed for last night's episode of the Starship Valkyrie LARP. It was fun to finally see it all in action.

I was a bodyguard from Maxicorp's Saf-Gard division, on a contract to protect an ambassador who was to be ferried by Valkyrie from Earth to the rebellious Sirius station for a diplomatic mission. Apart from in-game goals to protect the ambassador, my out-of-game goals were to be intimidating and distrustful/scornful of the Star Navy. Since I was glued to the ambassador, and there doesn't seem much reason for the bodyguard to casually chat with people, I didn't do a whole lot of that, but there were definitely a few occasions that allowed me some good opportunities. And my presence and general demeanor alone seemed sufficiently intimidating for many of the crew.

Alien sabotage complicated the mission enormously, but the crew struggled through. But let me tell you, that kind of disorganization would never be tolerated in the private sector. Maxicorp efficiency experts would be horrified.

I think one of the things that makes Valkyrie successful as a LARP is that nobody can do everything and everybody can do something. And the game is not so large that you're merely a cog. Everyone is at least a gear, or maybe an escapement or mainspring. The players can see that their position contributes to the whole, and each one owns that job. The fact that nobody can do everything is an important part of the equation. Oh sure, the captain runs the ship and gives orders, but he can't generate more power, or solve that science mystery, or win that dogfight. The crew do, collectively.

The quilt from Em: 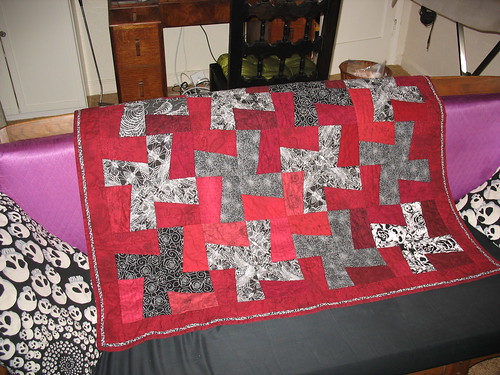 And Winston enjoys his present, too. 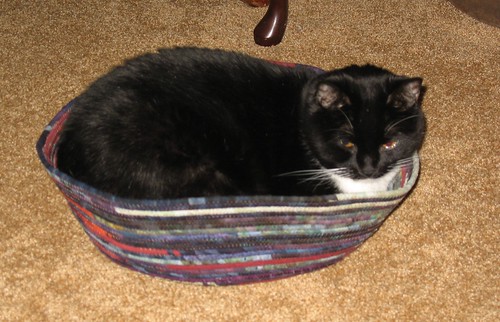