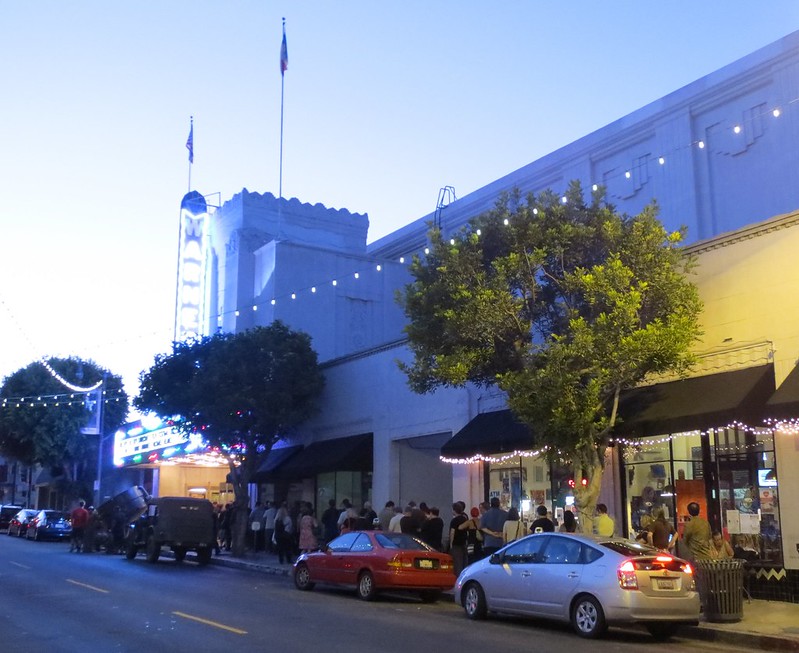 First of all, Day Two is today. Come on down.

I got home from work and had a brief moment to greet wife and cats. Cats were unimpressed; wife was slightly more impressed, but preoccupied by creating a certain something for the Sunday LARP/scavenger hunt at the festival: The Lash of St. Francis.

Then to fight the freeways during Son of Carmaggedon. Not really affecting my route, but people were still slightly crazier than usual. Anyway, got there safe and sound.

Waved hello to a couple folks, and then first up, a feature (premiere even!) of The Thing on the Doorstep. It was really quite good. So good that it reaches a level of good where I start to get more critical, but I'll forgo that. I liked the very psychological take on the interplay between Derby, Upton, Asenath, and Upton's wife. I think the movie would also play reasonably well with an audience with no knowledge of the story. Alrighty, I'll utter one really trivial quibble. I've always considered Edward Pickman Derby's name to be pronounced UK-style: "Darby". Maybe that's just me. It's not like this filled me with rage or anything. Made me consider dusting off my own attempt at a screenplay adaptation of "Thing".

Next up, Macabre Fantasy Radio Theater. It was neat to see a gaggle of my friends get together to do "The Statement of Randolph Carter" with some live foley work and all. It was a bit of an experiment, but I think it came off great. There's kind of a strange oxymoronic feel to watching a radio show being performed, but it's interesting to see how much a cheap little sound effect can help fill the audio space. On the other hand, sometimes seeing the cheap (but authentic old time-y radio-y) sound effect made for unintentional humor. On the whole, I dug it, and the audience around me dug it.

Then the South Park Coon Trilogy, in which the foul mouthed little children ultimately meet Cthulhu. Cthulhu himself doesn't actually add much humor, but there are some hysterical bits here and there. The idea of Captain Hindsight (particularly his origin story as a TV reporter) is inspired. But the part I laughed at most was recognizing the Clockwork Orange sound cue, and knowing what had to come next.

That wrapped up the screenings, but then the die-hards migrated to the Whale and Ale pub, who were again kind enough to put up with our baloney. And here your narrator was slightly naughty. Frank Woodward ran a Lovecraft trivia game. And my table (David, Sarah, and Blake) joined up as team Gibbous (aka Lady Shaggaggath). Aaron was too late to stop us from taking prizes from deserving paying customers. Round One was relatively basic, and I think two teams had perfect scores. Round Two got much harder, and we missed at least a couple, though fortunately David came up with one ship from "The Call of Cthulhu" and I came up with the other. Round Three had some focus on film adaptations of Lovecraft, and Blake was able to provide the correct answer to a question about Castle Freak. Team effort! Uh, Sarah provided excellent high fives!

And thanks to all the sponsors who gave neat gifties for the top three teams, even if (as a 'ringer' in Aaron's parlance) I probably ought to have hid my light under a bushel. I swear, I think I have won a raffle at every HPLFF I've been to. I have resolved to sit on my hands if my number comes up in the future.

Unless I really really want that thing.
Collapse