Jason came up and we whipped up some of the best cheeseburgers in the world. We knocked back cheeseburgers, wine, and conversation. After Jason bugged out, we hit a tiny bit of the Inglewood Open Studios. First up was TJ Walker, who had a little space on La Brea just south of us. Nice work and a friendly guy. Then to the largest gathering at the Beacon Arts Building, which contains many artist studios. Plenty of variety from the absurd to the cool. I liked Brian Biedul's figures trapped in their canvas spaces.

Although it was interesting. Seeing the one downstairs in the 'general' gallery made it stand out, but in his studio where there were a dozen of them, they suddenly seemed less special. That and the pricetag that looked more like a salary nipped any thoughts of becoming an art collector in the bud.
Another playful installation was the playable rubber tree: 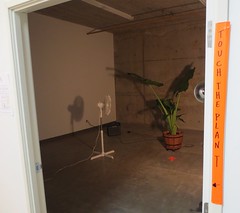 The artist had installed pickups so that when you thumped the trunk you got a nice percussive sound. In her studio, she had some smaller examples, like cacti, where you could pluck the needles to make pops, or let the needle scratch along your fingerprints in a ripply crackle.
But my favorite was Virginia Broersma's work: 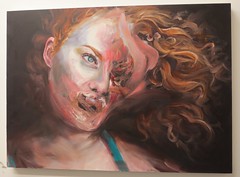 For her, it was about images of women exercising, combined with excursions away from realism. For me, they're beauty leavened by monstrosity.
We also peeked into some corners of the building, where Dr. Pookie particularly liked this warning sign: 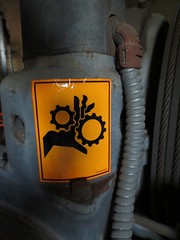