Due to smaug's great generosity, I played hooky from work and went to see The Hobbit with some friends. It strays more from the story than even the LotR films, but since I love the source material less, I was filled with less outrage. It's long, but I didn't find that it dragged at all. However, some of the interpolations of backstory and sidestory definitely detract from the flow of telling the story of our title character.

Things to like:
#1) The riddle scene. Well executed, and a good integration of Serkis' Gollum schtick from LotR into the scene. Glad they kept most of the riddles, but my favorite was evidently left on the cutting room floor:

Alive without breath,
As cold as death;
Never thirsty, ever drinking,
All in mail never clinking

#2) The songs. Many (maybe all) of the songs are retained. They never sound like they do in my imagination, but I'll forgive them (this time) since I could not imagine something as interesting as the film's dwarven barbershop duodecet.

#3) The beautiful look of gold coins spilling about in Smaug's hoard. The hoard is impossibly big, but it glows and clinks and pours loverly.

Things to dislike:
#1) The uneven tone. The book is a much lighter adventure than LotR, and the fusion that they've done veers erraticly from intense to the very threshold (if not beyond) of camp. The horrifyingly comical Radagast has no point being in the same movie as the Witch King of Angmar, much less the same scene. [Incidentally, parents should note the PG-13 rating, and stick with the Rankin/Bass Hobbit until their kids are ready for beheadings galore.]

#2) This one goes to eleven. The faint allusion to mountain giants in the book is expanded into something ridiculous. My mind just refuses to accept it. As with a scene where the party is hurtling down into the caverns on a wooden platform -- my brain looks at the speed of their descent and told me, "They're all dead." Also, the episode when the party is treed has been ramped up. Etc. Etc. If you thought the collapsing staircase scene in Moria was gratuitous and unbelievable (and it is), The Hobbit has at least three scenes that are worse on that score. 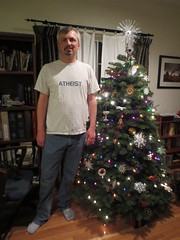