Great article on the 'Homeschool Apostates' -- kids raised in overly strict and/or abusive religious homeschooling environments who are not just leaving the movement, but banding together into networks to try to effect changes in the law and in organizations like the Home School Legal Defense Association.

And yes, I can't resist the Schadenfreude that one of the few social activities that these organizations supported was debate. The goal was that this "would create a new generation of culture warriors with the skills to “engage the culture for Christ.” "

“You can’t do debate unless you teach people how to look at different sides of an issue, to research all the different arguments that could be made for and against something,” Stollar says. “And so all of a sudden, debate as a way to create culture-war soldiers backfires. They go into this being well trained, they start questioning something neutral like energy policy, but it doesn’t stop there. They start questioning everything.”
...
Swanson, who helped bring debate clubs to Colorado, said he’d seen a “significant majority” of debate alumni turn out wrong, becoming “prima donnas” and “big shots.” “I’m not saying it’s wrong to do speech/debate,” Swanson told his listeners, “but I will say that some of the speech/debate can encourage sort of this proud, arrogant approach and an autonomous approach to philosophy

Holy Cats, they start weighing all sides of an issue and thinking for themselves? What have we done?!?

(Yes, yes, I know a few of you out there in the friendosphere are homeschoolers (or homeschooled) but as far as I know, none of you are batshit insane.)

Tails [not sic] is an anthology of stories about cats (rather generously applied in some cases to felids other than the common housecat). It's a nice thick book of 40 stories, and the list of authors is pretty spectacular: DeLint, Gaiman, Oates, Joyce, Beagle, Reggie Oliver, King, Crowley, Kessel, GRR Martin...

I'm afraid there's so many stories, it's hard to recall them all, but definitely the general quality is in keeping with the good company. Trying to flip through and recall anything that stands out in my mind...

The dismal slice of life of Michael Marshall Smith's "Not Waving" is not exactly enjoyable, but powerful.
Kelly Link's "Catskin" is a dark fable of revenge.
Mary Turzillo's "Pride" maybe heads for a predictable ending, but I enjoyed the ride.
Joyce Carol Oates' "The White Cat" is a great story. Even if it's 'just' a peculiar inversion of Poe's Black Cat, it's really well-done and stands alone without being derivative.
Nancy Etchemendy's "Cat in Glass" has a nice Twilight Zone feel to it.
John Kessel's "Every Angel is Terrifying" ends with a kind of horrible mystery (in a good way).
John Crowley's "Antiquities" is a satisfying gentleman's club story with just the right amount of implausibility.
Dennis Danvers' "Healing Benjamin" amuses you till you get to that heart-wrenching ending.
I liked the idea behind Theodora Goss' "The Puma" -- a 'sequel' to the Island of Dr. Moreau -- but it didn't quite live up to my expectation.

My grandfather passed away, quietly, earlier today. I find myself with too much and too little to say.

He lived a full life, a long life, and one filled with family and friends and experiences all over the world.

Somehow I feel certain this is how he would like to be remembered (even if the California Raisin costume showed off his legs better). 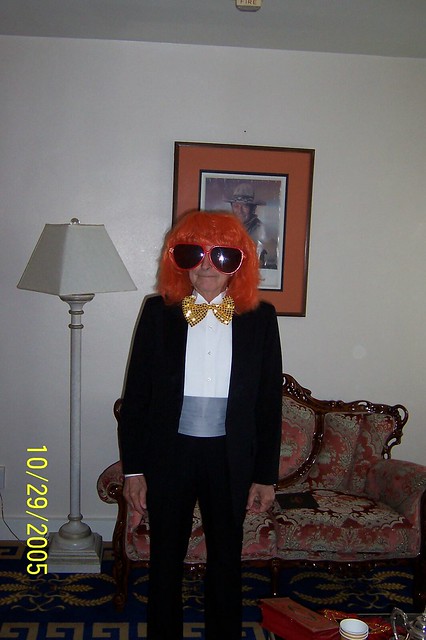