An Oklahoma lawmaker, reacting to the court decision to overturn the ban on same-sex marriage, says:

“[My constituents are] willing to have that discussion about whether marriage needs to be regulated by the state at all.”

Now, the title of the article is "Oklahoma Lawmaker Wants To Ban All Marriages".

Now, there's only a shell bill, so we don't really know what the tactic is going to be. I expect something like: "OK will no longer issue marriage licenses, but other laws (such as the one that requires officiants to only perform ceremonies for couples with a valid marriage license) remain on the books." That would effectively ban marriage. And I wouldn't expect it to last long, for one reason or another.

But if the law actually did eliminate all state regulation of marriage... and the state is no longer in the business of determining what is and what isn't a valid marriage... then you could marry your refrigerator and your goldfish. OK, it would no longer have any legal meaning within the state, and I imagine(?) the Federal government would not need to recognize a marriage without any state paperwork. But you could do it. Yay liberty?

Yes, I survived the Snowpocalypse, and made it back to the best place lack-of-gods made.

But rather than slump into a puddle -- that's what Sunday's for! -- Saturday was pretty full. We started off with an estate sale, where the decedent was a bit of a hoarder, but had a particular fondness and knowledge of glass. I spotted a uranium glass juicer in one of the photos from the estate agent, and since Dr. Pookie is an aficionado of uranium glass (aka vaseline glass), we went down there. We found quite a trove of uranium glass pieces, and walked away with quite a haul.

Later, we went to the Day on Broadway (having been tipped off by colleency). The idea was that several old movie palaces were open to the public, and we went to gawk at them (and a few other things in the neighborhood). All photos here

Hard to ignore the Eastern Columbia Building, which was close to the registration desk. 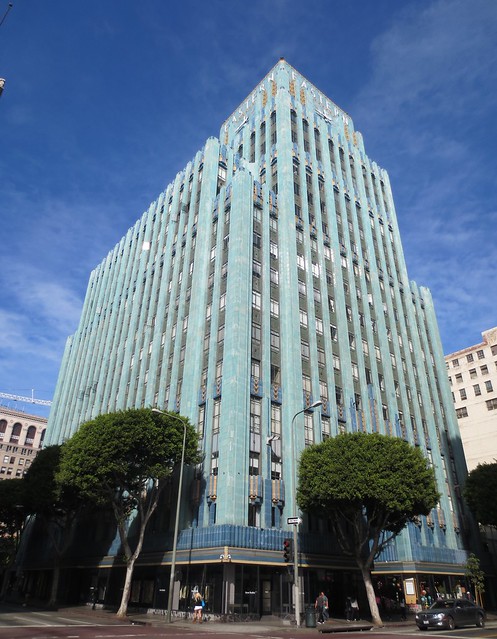 After registering, we headed off to Cole's for a French Dip and a drink. We poked our nose into the Bradbury Building, and then on to the theaters.

It's hard (in the photo) to appreciate how huge the ceiling of the Million Dollar Theater (1918!) is: 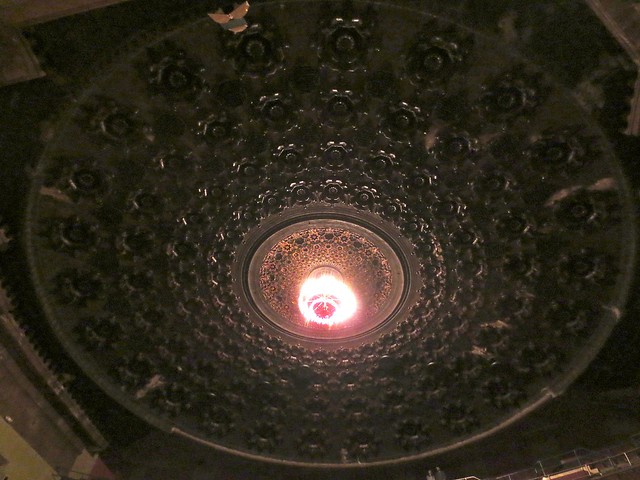 And what can one say about its strange tutelary spirit? 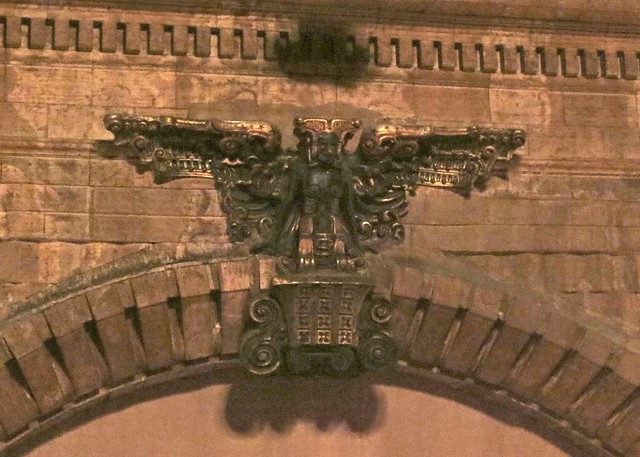 The Los Angeles Theater was a real revelation, with its crystal 'fountain' 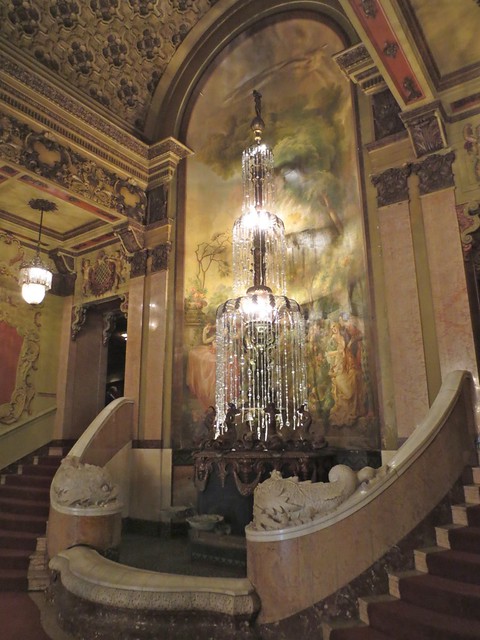 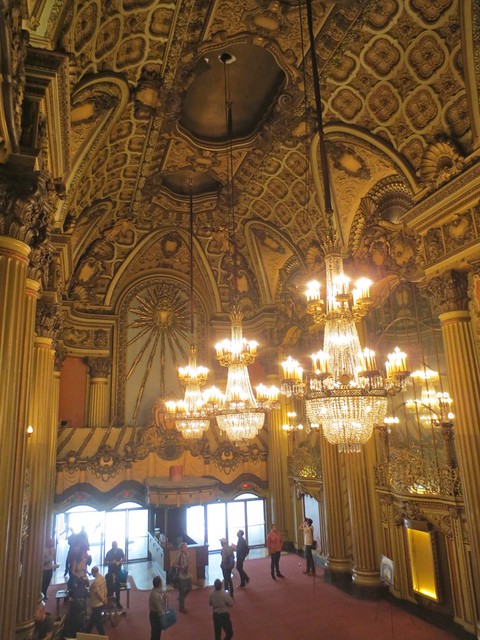 The mostly gutted Globe provided contrast with the others, which were generally much more restored. 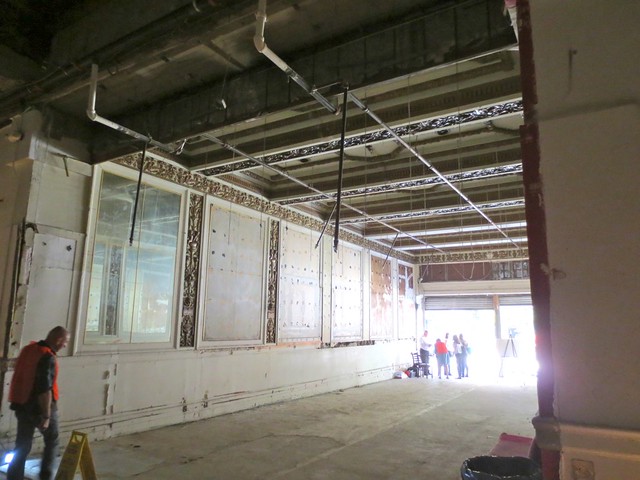 The Orpheum is pretty amazing, and the duffer at the organ was showing off its capabilities 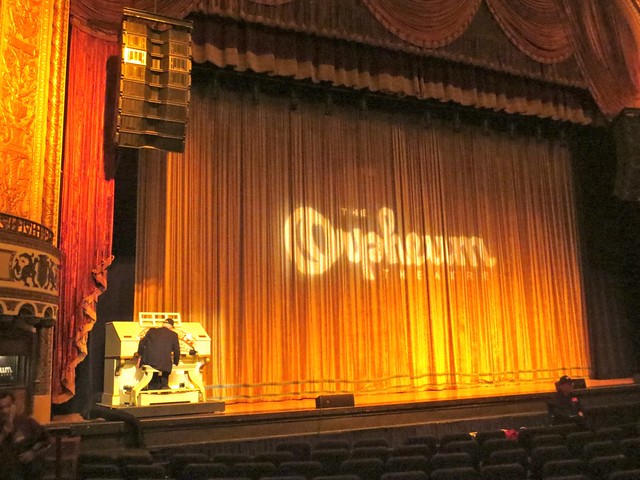 The place is huuuuuuuuge 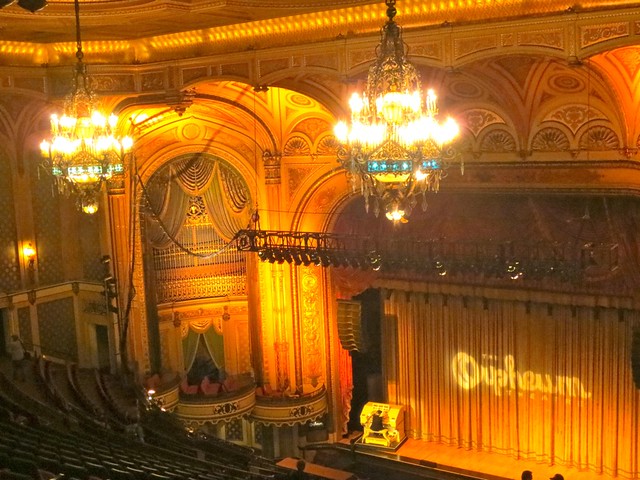 Later, Dr. Pookie took me out to Pizzeria Mozza. The fried cauliflower was much browner than at Bucato, but still good. The dipping sauce was good, but not as amazing as the fresh dressing and herbs of Bucato. Some fine bread and prosciutto as well, before the main course -- The pizza with "Bacon, Salami, Fennel Sausage, Guanciale [aka pork cheek 'bacon'], Tomato & Mozzarella". Yes, it was meat heavy, but it was glorious. We pride ourselves on our homemade pizza, but this was even better. By a lot. For dessert, some little scoops of blood orange sorbet (extremely yum), chocolate rum gelato (gorgeous, but possibly(?) too rich) and 'olive oil' gelato: mild olive oil gelato coated in olive oil and salt. A very neat taste, but not as engrossing as the other two.
Collapse