Dad came and visited with us earlier this week. Among the chitchat and socializing, he produced an heirloom. Grandpa, who passed away last year, had given it to Dad at some point, and now Dad was giving it to me. 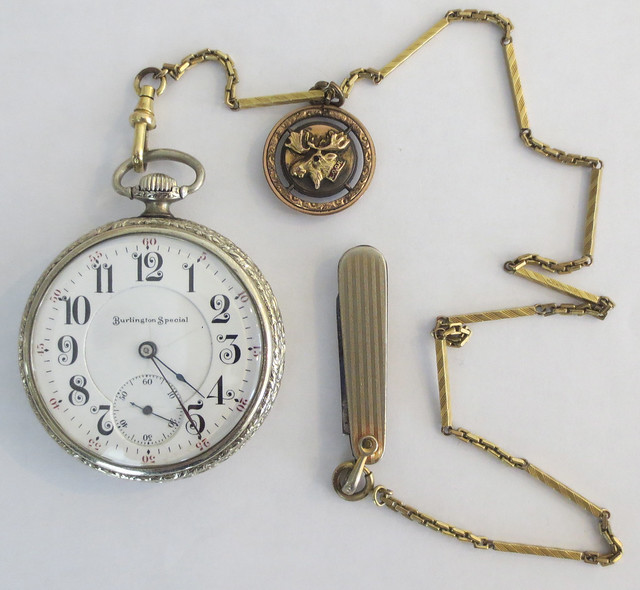 [Please do not quote Pulp Fiction at me.]

The watch belonged to Grandpa's Grandpa, Harry Gamble. Being an internet nerd, I have been researching both him and the watch.

To be honest, grandpa's line has been a little mysterious, since his father left (and was ultimately legally declared dead -- his actual fate is unknown) and his mother also was not able to take care of him. So he was actually raised by his grandfather and grandmother, Anita. He went by Gamble as his last name until high school.

I hunted about, and then was almost startled to find the 1940 census record of Harry and Anita Gamble, living with their 18-year-old grandson Robert T., in Akron, Ohio. From there, a little more sleuthing produced:

Helen would be Grandpa's mother.

It's a 19 jewel movement, with a lever setting mechanism. That's similar to what's found in railroad watches (so that you can't accidentally mess up the time), but apparently it's not quite railroad watch standard.

The case (often obtained separately from the movement) appears to be made by the Illinois Watch Case Co. -- 14K Gold-Filled, Post-1924. Though I wonder about the date.

There are some curious scratches inside the case as well. Apparently, these are commonly used by repairmen who scratch dates and invoice numbers in there. One of the markings is 1/14, which corresponds well with the 1911 date of the movement, but not so well with the post-1924 date that website had for the case.

And of course, there's the chain. Harry Gamble was a member of the Loyal Order of Moose. So now I have Grandpa's Masonic pin, and Great-Great-Grandpa's Moose watch-chain. Now I just need something from the BPOE and the Oddfellows, and I'm set. (I already have the Illuminati and the A∴A∴ covered.)

Anyway, here's a look at the movement. 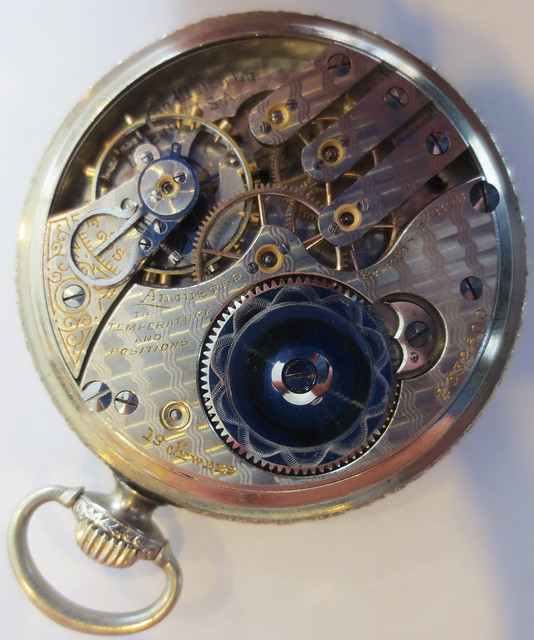