It was a really great show. I only wish it hadn't been a long show after a long Friday after a long week, but I still had such a great time.

Can't argue with the Wiltern as a venue. The place is gorgeous. It looked a little different this time, with a half dozen minibars throughout the various lobbies selling Caucasians. Lots of people milling about. Fewer costumes than at the bowling night we went to last time, but still quite a few. We got ourselves a couple oat sodas and found a nice spot in the mezzanine. A bit before showtime, Peter Exline came out and told his story.

The Kyle Gass Band opened up the official festivities, dropping in to see what condition their condition was in. They had to work at it, and they definitely stepped over the line by trying out an Eagles tune, but they soon had the crowd whipped up and plenty of people on their feet at the foot of the stage. Some impressive rock flute.

While they changed gear, a few more of the actors said hello. Coffeeshop lady had just turned 80, and the fest crowd filled that room with "Happy Birthday". Ralphs checker girl. My pic of irate Corvette owner was blurrier than most, but he was there. Liam. And Jeff Dowd, who was the Seattle Seven (with six other guys). He rambled a bit, and perhaps had been less (more?) strict than usual with his drug regimen.

Bridges came back to introduce the film, and Duded himself up with sweater and glasses. The crowd went apeshit. This is a terrible picture of a perfect little moment: 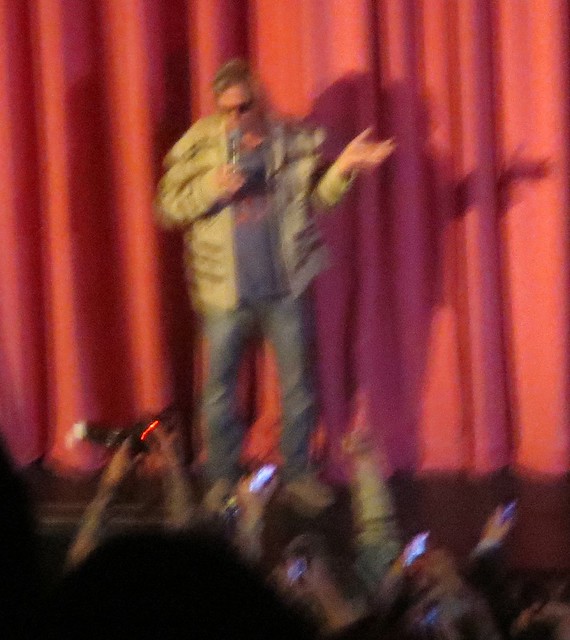 My favorite part of watching the movie was seeing that everyone else (at least in LA) recognizes that LA is also a star of this film. When you first see the lights of the city, that got as much applause as most of the other characters when they appeared. Philip Seymour Hoffman was sent off with the longest applause.

It was a given that people were going to shout out lines, but it was all good fun (except that one drunk guy). Another given is that whenever the Dude lit a J, the audience was going to do likewise. You wouldn't think you could make that huge space reek, but you can. If I have a least favorite part, it's that too many guys seem to think that Walter is the hero of this film. He's not wrong; he's just an asshole.
Collapse