Okay, I'm not trying real hard to complete the bookchallenge thing, but I'm trying a little.

Anyway, I was thinking I could get a two-fer with...

Being a vulgarian, I'm not that into drama, but I looked at some of the recent winners, and there were a few that piqued my interest, but I was hoping for a cheap Kindle edition. Or in fact, any Kindle edition. After some frustrating looking, I said fuckit, let's go with the first ever Drama winner from 1917: Why Marry?

It's interesting as a time capsule, but not just for historical interest. I think the reviewer in the link is right that "I think a fascinating paper would be a queer reading of this play, especially because many of Helen and Ernest’s thoughts about marriage are reminiscent of rhetoric currently being used on both sides of the gay marriage/civil union argument."

It's also very timely given the notoriety of Nobel Prize-winner Tim Hunt's recent comments about women in the lab. The main couple in the play are scientists who work together, and it sounds very much like "you fall in love with them, they fall in love with you."

But things stand in the way of their happiness. He's poor-ish, and if he married her, he wouldn't be able to keep her in style, but she doesn't want that, she wants to continue working in the lab, and other characters representing cultural and religious forces disapprove of various parts of the plan. They get worked into a state where she won't marry him on principle, and he won't take her to McGuffinland to continue his research if she's a single lady. They nearly get things worked out to go and live and work together in sin, and that offends everybody. And on to the conclusion.

Anyway, the play may also be of interest to women in the sciences, and those who love them.

From the foreword by the author:
"When this play was first published most people were not thinking along these lines. Such ideas were considered radical then. They will soon be old-fashioned—even on the stage. Kind and discriminating as the critics have been in regard to this comedy (a discriminating critic being, of course, one who praises your play)...
...
They do not object to finding fault with mankind because "you can't change human nature," as they are fond of telling you with an interesting air of originality. But laws, customs, and ideals can be changed, can be improved. Therefore they cry: "Hands off! How dare you!" Man made human institutions, therefore we reverence them."

I'd been to the Hollyhock House before, but this was the first time I got to see the inside (no pics allowed inside, alas). Lots of neat original details within, and reconstructions of some of the furniture.

Also in the park is one of the original guest houses, now sadly in disrepair. 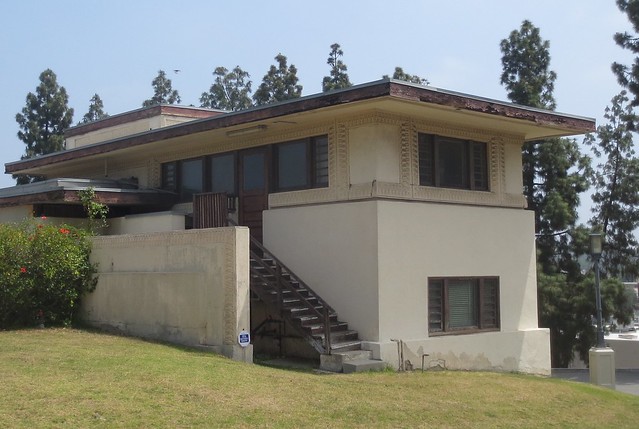