I loved the TV show, a 3-part miniseries. The book was also good, but maybe not quite as tight and engaging as the show. Neil Shubin discusses the lead-up to his discovery of Tiktaalik (one of the great successful predictions of evolutionary theory (and geology)), and then goes on from there to explain how certain features of human anatomy had their origins in fish. A nice blend of palaeontological, anatomical, and genetic evidences. The last chapter I thought a bit weak -- sort of a scattershot approach of listing human features and expounding on the evolutionary linkages. It felt disconnected.

"One of these creatures has the dubious distinction of almost never being seen in the wild. In the late 1880s, a strangely simple creature was discovered living on the glass walls of an aquarium. Unlike anything else alive, it looked like a mass of goo. The only thing we can compare it with is the alien creature in the Steve McQueen movie The Blob. ... Shringk the Blob down to between 200 and 1000 cells, about two millimeters in diameter, and we have the enigmatic living creature known as a placozoon."

"It turns out the pattern generator responsible for hiccups is virtually identical to one in amphibians. And not just any amphibians -- in tadpoles, which use both lungs and gills to breathe. Tadpoles use this pattern generator when they breathe with gills. In that circumstance, they want to pump water into their mout and throat and across the gills, but they do not want the water to enter their lungs. To prevent it from doing so, they close the glottis, the flap that closes off the breathing tube."

The Memoirs of Solar Pons collects yet more of August Derleth's Sherlock Holmes pastiches. I'm obliged to read them, since they were issued by Arkham House's sister imprint for mysteries: Mycroft & Moran. The first one gives away (to the non brain-dead among us) the solution in the title. A few rise above Derleth's usual hack job.

We made a snap decision to take a road-trip. We started off in San Marino, hitting an estate sale where Dr. Pookie picked up more uranium glass.

Then out to Ojai. 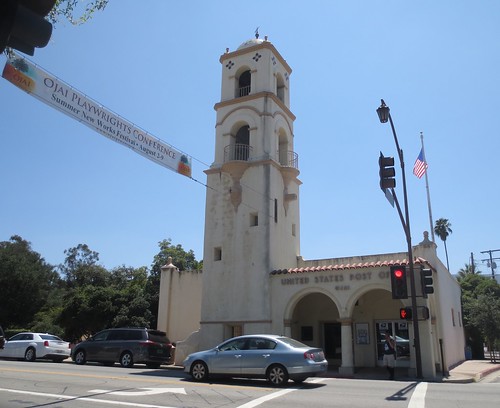 There is a ladder to the tower, but the door is locked. A sign says you climb at your own risk.

We had a nice lunch at Suzanne's Cuisine. Possibly inspired by the recent potato chip tasting at work, I opted for the Reuben sandwich (my least unfavorite of the four flavors).

The Museum has some historical doodads and taxidermed animals. One thing that caught my eye was a jug of Pixo Cola concentrate from the Pixie Flavor Base Co.

The address on the jug is on Vernon, less than ten blocks from our house. Sadly, the only thing I can learn about the Pixie Flavor Base Co is that it got in trouble with the FDA in 1943 for adulterating/mislabelling orangeade concentrate. "On October 5, 1943, no claimant having appeared, judgment of condemnation was entered and the product was ordered destroyed or delivered to some charitable institution."

But there was also a temporary exhibit of items from Sergio Aragones' personal comics collection. Not of his own work, but the work of others, much of it signed personally to him. Aragones is now a local resident, and actually next Saturday (and again on Sep 19) you can tour the exhibit with him for a mere $25.

I was impressed by it, but I'm sure my comic book fan friends probably would have gone bananas. 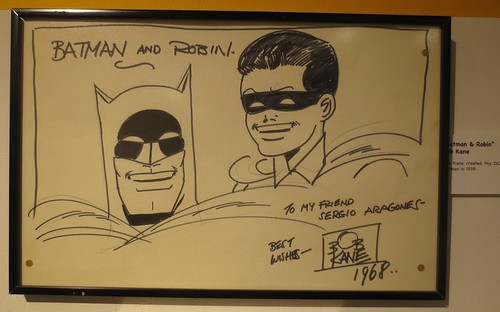 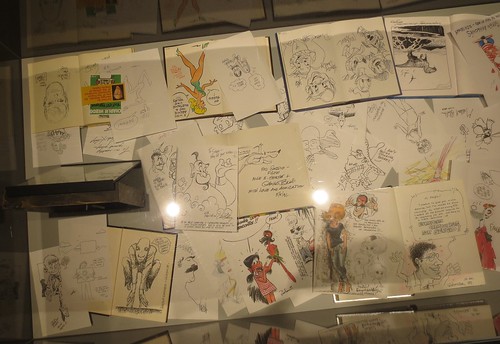 We stopped at Bart's Books, which is a local institution. Didn't buy anything, but it's got a lot of stuff packed into a crazy space. A house that's been eaten by a bookstore. Books on the exterior walls just stay there, and you're advised to drop coins in a slot to pay for them after hours.

We did a wine tasting and an olive oil tasting, and came away with bottles of both. And then pointed the car home. PCH was probably not a good choice on a summer beach day, but it was made worse by an accident that shut things down for a bit. Still more interesting than either the 101 or going back the way we came.
Collapse