We've gone on hike... by mistake 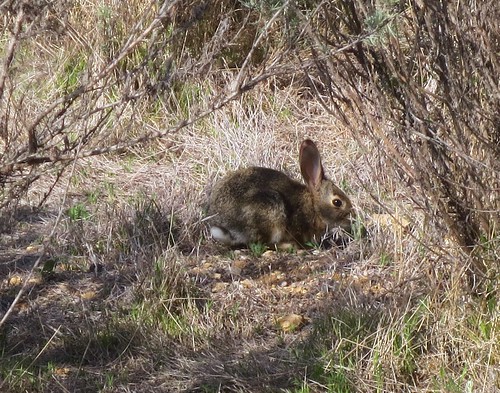 The bossfella gives us Good Friday off, so Dr. Pookie and I set off to climb around Rancho Palos Verde. Just a few steps into the relative wilderness, we found the Ostara Lagomorph.

Sadly, this was not the hike we were looking for. Through some ambiguity in instruction, we wound up clambering around the Forrestal Reserve instead of the PV Peninsula Land Conservancy. We took the trail less travelled (and more poorly maintained), And that made all the difference. Oh, there were nice views of the cliffs and the hills and Catalina and the ocean, but we were scrambling up hillsides, and the trail was becoming less and less a trail, and more of a track, or perhaps a vague figment.

Then Dr. Pookie let out an ululation of cosmic terror that puts to shame the noise she made at her surprise birthday party. This noise was to indicate that I had rather blithely trodden on a rattlesnake. Oh pshaw, thinks I, this is the Dr. Pookie who once mistook a twig for an earthworm, surely th.. Holy Shit there's a snake, disappearing into the manzanita. It does seem to have what one might call a rather distinctive sort of diamond-y pattern on its back, but mayb... "Shk-shk-shk-shk-shk-shk-shk-shk-shk," quotha the snake.

It is clear that I do not have what it takes to be a war photojournalist, because my only thoughts were of self-preservation. At this point, the trail is a line segment AB, with Dr. Pookie at A, your humble narrator at B, and a pissed off invisible rattlesnake somewhere just to the side of AB. I found an alternate route to A, and we decided the adrenaline was probably the equivalent of a good 20 mile hike, and it were best if we descended and returned to the car.

More pics, including one more adorable bunny, if you click through. In addition to the Easter Bunny and the Easter Rattlesnake, we saw Easter Crows, Easter Hawks, other miscellaneous Easter avians, and the Easter Stink Bug. Oh, and a run-over Easter Skunk on the way back.
Tags: death, hike, la
Subscribe