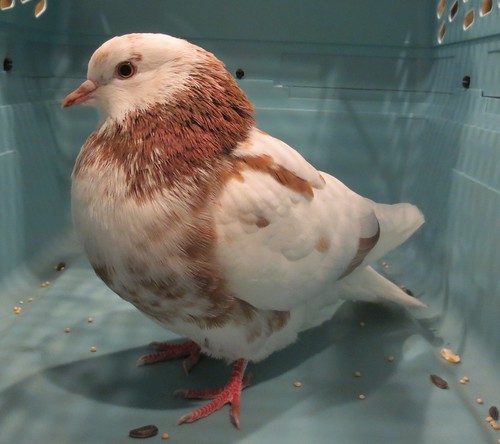 We spotted this guy hanging out with the urban pigeons on the gas station roof this weekend. He was clearly not doing a good job pretending he was 'street'. In fact, Dr. Pookie spotted that he has a band, so he must belong to some pigeon fancier. She put out some seed for him. She also called the Compton Pigeon Fanciers or something like that, but no one there showed any interest in collecting said bird, but if we caught it, and read the band, they would find the owner.This evening, he was hanging around again, and so I got the job of catching him. Fortunately, he's a domesticated little beastie, so I got him on my second try. We've put in a call to the pigeon fanciers, so if they get back to us in a day or two, all is well. If not, it's roasted squab on Friday.